The 2011 Occasions Mini Catalog has so many great new items to choose from; it was hard to browse through the catalog and make a decision on what to purchase UNTIL I reached page 27.  That's when I stopped and said, "Wow!"  This stamp set was first on the list of Must Haves for this catalog.  And I'm still saying "Wow!"

Here's the first card I made with this stamp set.  I included Botanical Gazette and First Edition Designer Series Papers to create a rather "simple" vintage look for this card. 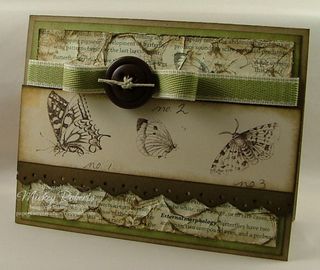 Let's start with the top and work our way to the Crumb Cake card base.

Right above the butterflies on Soft Suede cardstock are two pieces of Pear Pizzazz Polytwill ribbon.  The sponge used to apply Early Espresso ink to all the cardstock and paper edges was swiped along the facing side of both pieces of ribbon.  One piece of ribbon lies flat snugged up to the top edge of the Soft Suede cardstock with the edges folded to the back of the Pear Pizzazz cardstock.  The second piece was formed into a circle with the ends adhered flat together.  The ends were placed on the back of a Sweet Stitches (Chocolate Chip) Big Designer Button and then the circle was smooshed to create two loops.  Hemp Twine was threaded through opposing button holes of the button, pulled behind the loops and then back up through the remaining opposing button holes.  The twine was tied off on the front of the button and knotted.  A couple of Mini Glue Dots were added to the back of the button/ribbon to better anchor it to the flat ribbon lying on top of the First Edition Designer Series Paper.

Finally, the Pear Pizzazz cardstock is mounted to the Crumb Cake card base. 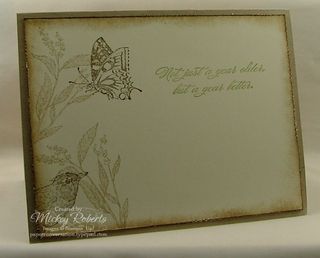 The inside sentiment area of the card was lined with a piece of Very Vanilla cardstock.  The flower and stem were stamped twice on the left side using Crumb Cake ink and the butterfly and bird images were added with Early Espresso ink.  A sentiment from the Bring on the Cake stamp set (another Must Have from the Occasions Mini Catalog) was stamped using Pear Pizzazz ink.  As with everything else, the edges of the Very Vanilla cardstock were sponged with Early Espresso ink. 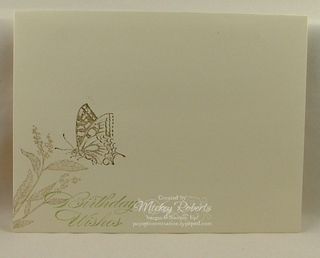 This card was designed for the January meeting of the SASS Stamp Club.  They really enjoyed making the card.  Most of the Stamp Club members love the look of distressing but had never really understood the process.  I have to admit that I enjoyed the looks of horror on their faces when the First Edition Designer Series Paper was wadded into a tight ball and swiped with dark brown ink over their carefully stamped images.  Once they got over the shock, though, they relaxed and enjoyed the distressing process.  It's certainly a great way to work out some tension!  Give it a try!

Gorgous card! I like how you distressed the First Edition DSP. And the inside and envelope are gorgeous too!

Beautiful card, you did a "FAB" job, thanks for sharing. I love how you carried the images all the way through,from card to envelope.

Wow! Love the way this one turned out! The inside of your card would make a beautiful card!

This is so seriously gorgeous,I don't know where to start!!!

Mickey, I loved the description of demoing the distressing to your stamp club...that made me smile. This card is gorgeous, and I must admit, that stamps set stopped my in my tracks the first time I saw it, too!

Sorry to hear of your father's passing. I figured there was something going on since you hadn't posted in a while. (((Hugs)))

This is GORGEOUS! I'm going to borrow Nature Walk from my upline and CASE this card! TFS.

I was wondering where butterflie # 2 & 3 came from? Love the card

Beautiful card. However, the comments about your dad were very special and will be remembered by you and those who know you and your father. May God heal your heart and help you through this difficult time and comfort you with His love and guidance.
Gale Sewell

This is absolutely lovely! I don't have this stamp set, but I love the design, so I'm going to case it, if you don't mind!

Love all of these cards- my favorite is the first one though! Great layout out nd love the distressing!

My goodness, Mickey, this is gorgeous! I love that the inside and the envelope are so well coordinated with the front. I imagine this is even more beautiful in person.

Absolutely gorgeous, inside and out! Someone will be very blessed to receive this

Beautiful Card!! I just love this!!!

You outdid yourself on this one, Mickey! I envy your planning of all the little details, and I love your distressing techniques!
It is just beautiful!

Very pretty! Love this paper and what you've done with it and the images!

Mickey,
This is absolutely lovely.
Beauty and compassion.
What a beautiful memory of your Dad.
Thank you for sharing.
You all are blessed.

To get the additional information and place the order just visit our website:


To order our fake documents please send your enquiries to our E-mail: