What's Black and White and Red...

Hello!  Thanks so much for taking the time to visit!

It's a busy time for me right now at my "day job."  We're back on track toward launch of STS-133, Space Shuttle Discovery, on February 24th.  The weather looks terrific for tanking and launch; so hopefully, we'll have a successful launch tomorrow afternoon around 4:50 p.m. (Eastern).

I wanted to share with you the final Thank You card I made for my Mom.  This one features a paper folding technique that was demonstrated to the 3-2-1 Stamp Team last Fall by the extremely talented Stampin' Up! demonstrator, Beth Daniels.  Since then, I've been looking for an opportunity to use this technique, and felt that this card design was a perfect showcase for it! 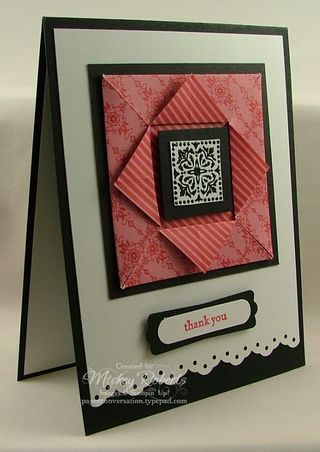 This paper folding technique uses a 4" square of Real Red patterned paper from the Brights Patterns Designer Series Paper Stack.  I'm really glad that Stampin' Up! went to these paper stacks.  It used to be that if you wanted a specific color patterned paper, you had to buy a pack of 12 double-sided sheets of that single color for $9.95.  Unless you were making a whole lot of stuff using that single color, you found that this paper was just lying around gathering dust.  With the Patterns Designer Series Paper Stacks, you get patterned paper for every color in each of the color families:  Brights, Subtles, Regals, Neutrals, and In Color at the really great price of $19.95!  (And in this paper stack you get 40 double-sided sheets of Designer Series Paper!) The inside sentiment area of the Basic Black card was lined with a piece of Whisper White cardstock.  The medallion image was stamped in the upper left corner using Basic Black ink and in the lower right corner using Real Red ink. 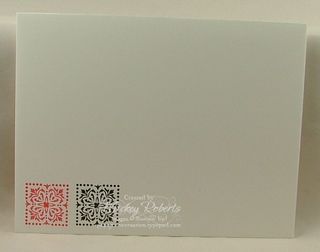 I think after making all these Thank You cards for Mom, I'm probably over using a combination of Red and Black for a while.  I really like the eye appeal of this color combo, though, and need to remember to use it every once in a while to shake things up a bit, color wise.

Hi there Mickey, I found your blog through SUDSOL -I can't believe this is the first time I have seen your blog-I have had a great time browsing your site. I LOVE this card -in fact I would love to have this framed:-) -You know when you see a card and it just "speaks to you" Well that is what this card does for me -Your mom's friends that receive the card will love them. How cool that you have a busy day job too!

Black, red and white are great together! Very elegant! Love the frame on this stunning card!

Thanks for sharing this card and the technique. Will definitely be casing both :)

Love the detail in this card Mickey. Thanks for sharing!