A Retro Type of Christmas

Here's the third of the five cards designed for my annual Christmas Card Class.  I was trying to achieve a retro look for this card.  What do you think? 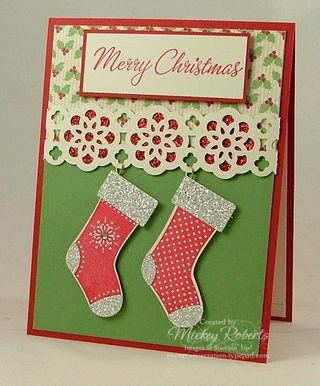 This card begins with a card base of Real Red cardstock.  A piece of Holly Berry Bouquet Specialty Designer Series Paper was adhered to the upper third of a panel of Wild Wasabi cardstock.  Adhered along the seam between the Designer Series Paper and the cardstock is a strip of Very Vanilla cardstock punched with the Lace Ribbon punch.  [Note that you'll need three whole circles and some overhang on each side for this card, so it helps to punch a 5 1/2" length to make sure you've accomplished this goal.]  Three 1" circles were punched from Real Red Glimmer paper and adhered to the back of the three whole circles using SNAIL.  SNAIL was applied to the back of the Real Red Glimmer Paper circles, then the punched ribbon was placed over the seam and the three circles centered across the Wild Wasabi panel.  (An adhesive remover was rubbed over the three whole circles to remove any exposed SNAIL.)  The overhang at each end of the punched ribbon was trimmed to approximately 1/2", folded under the Wild Wasabi panel, and SNAILed in place.  The Wild Wasabi panel was adhered to the card front using SNAIL.

Real Red ink was applied to two of the stockings from the Stiched Stockings stamp set and stamped on Very Vanilla cardstock.  The stockings were punched from the cardstock using the Stocking Builder punch.  The stocking cuffs, heels and toes were punched from Silver Glimmer paper and adhered to the punched stockings using SNAIL.  I just love this Glimmer Paper!  It SIGNIFICANTLY minimizes the glitter mess!  For the stocking with the snowflake, I added a small Basic Rhinestones Jewel to the center of the snowflake.  A small piece of gold elastic cord (Retired) was threaded through the bottom hole punch between the left and center circles and adhered to the back of the stocking using Mini Glue Dots.  The stocking was adhered to the Wild Wasabi panel using Stampin' Dimensionals.  The second stocking was hung from the punched ribbon in the same manner as the first, this time using the bottom hole punch between the right and center circles.

The "Merry Christmas" sentiment from the Four the Holidays stamp set was inked with Real Red ink and stamped on a piece of Very Vanilla cardstock matted with a piece of Real Red cardstock.  The sentiment was adhered to the exposed center of the Designer Series Paper using Stampin' Dimensionals. 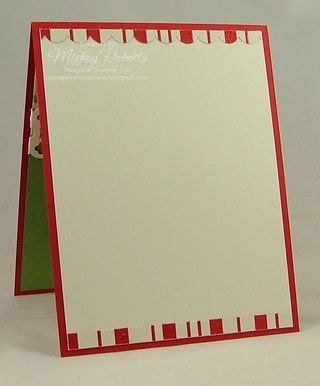 The inside sentiment area of the card was lined with a piece of Very Vanilla cardstock.  Two strips of glitter-embedded striped paper from the Holly Berry Bouquet Specialty Designer Series Paper were adhered to the top and bottom edges of the liner using SNAIL.  The top piece was punched with the Scallop Edge Border punch. 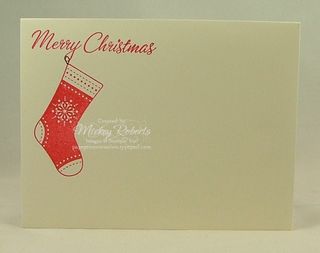 I'm hoping to have another card for you tomorrow.  I'm writing this while sitting with my Mom at a local hospital.  We're waiting for some surgeons to visit her and hope that they'll be able to alleviate some back pains that she's been having.  Wish us luck!

So cute! Love those stockings!
Diane

So pretty!! I love how you used the Lace Ribbon Border Punch!

Love the Red Glimmer Paper peeking out of the Lace Ribbon Border. I know this card really sparkles IRL!

The lace border punch design does remind me of the tile pattern in front of our fireplace when we moved in. I love the strips accents on the inside!

Love the glimmer paper behind the punch. Adds just the perfect touch to the card.

The comments to this entry are closed.