Hi there!  Happy Father's Day to all the Dads, Granddads, Step-Dads, Foster Dads, Dads-to-be, and anyone who stands as a Dad to a very lucky child.  I hope you all have a wonderful day!

Today's post is a cute gift card holder that I designed for the May meeting of the SASS Stamp Club.  Due to scheduling issues, lots of the members were unable to attend the meeting, so I made quite of few of these babies.  Thanks to the Big Shot, they were fun and easy to make! 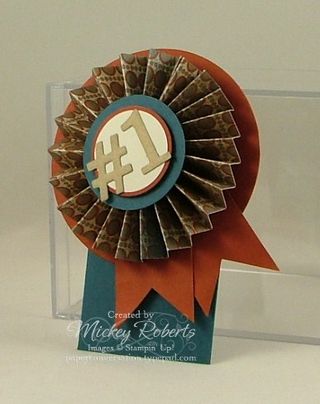 We begin with a piece of Not Quite Navy cardstock die cut using the Petite Pocket Bigz XL die.  The pocket was assembled using Tombow Multi Adhesive and a Gold Brad for the closure.  Attached to the non-closure side of the pocket is a piece of Cajun Craze cardstock die cut with the Big Shot and the 3 1/2" circle Originals die.  Fishtails were punched into the ends of two pieces of Cajun Craze cardstock using the 1 1/4" square punch and adhered to the die cut circle.

A 3" x 12" piece of Well Worn Designer Series Paper (Retired) was placed down the center of the Designer Rosette Bigz XL die (so that the pointed and scallop edges of the die were not used) and run through the Big Shot using the Mylar Shim under the die cut and the Extended Premium Crease Pad over the Designer Series paper and die (to ensure that all those score lines don't become cut lines).  Then the scored Designer Series Paper was cut down the middle vertically to create two 1 1/2" x 12" pieces.  The two pieces of Designer Series Paper were folded in mountain and valley folds and 1/8" holes were punched near the bottom end of each pleat.  The two pieces were joined to create a 1 1/2" x 24" long pleated piece of paper then Early Espresso/Whisper White Baker's Twine was threaded through all the 1/8" holes to bring the pleated paper into a circle.  The Baker's Twine was knotted, the tails of the twine cut off, and the two ends of the circle joined.  Two pieces of Sticky Strip were placed at the center of the 3 1/2" Cajun Craze circle and the rosette was pressed into place at the center of the Cajun Craze circle.

A piece of Not Quite Navy cardstock was punched with the 1 3/4" circle punch and adhered at the center of the rosette with Sticky Strip.  Scraps of Very Vanilla and Cajun Craze cardstock were punched with the 1 1/4" and 1 3/8" circle punches, respectively, adhered together, and then adhered to the center of the Not Quite Navy circle using Stampin' Dimensionals.  The "#" and "1" were die cut using the Big Shot from Brushed Gold cardstock using the Timeless Type Junior Alphabet Medium Sizzlits (Retired) and adhered to the Very Vanilla circle. 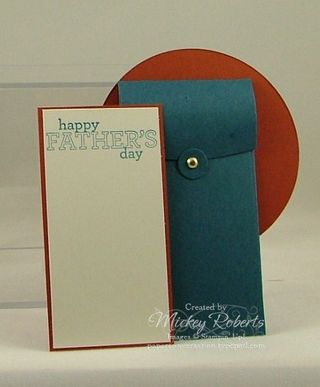 A note card was created from Very Vanilla and Cajun Craze cardstocks to slide into the pocket opening behind the rosette.  The Father's Day greeting, from the Delightful Dozen stamp set, was stamped at the top of the note card using Not Quite Navy ink and the Stamp-A-Ma-Jig to ensure correct placement of the sentiment.

Here's the card I made for my husband for Father's Day.  He's in his "man cave" right now drooling over his Father's Day gift.  I'll be taking a new towel into him soon. 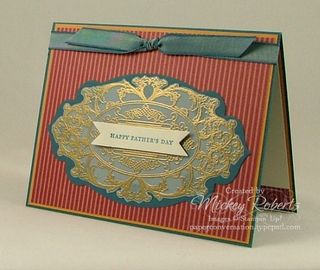 I guess the first thing you notice is that the color combo used on this card is very similar to that used for the #1 Dad Gift Card Holder.  I really like the Not Quite Navy/Cajun Craze color combo for masculine cards; however, this time I added More Mustard instead of Brushed Gold.  That's because I used Gold Stampin' Emboss powder to heat emboss the image from the Layered Labels stamp set which doesn't seem to work for me with Brushed Gold.

This card begins with a card base of Not Quite Navy.  A piece of Cajun Craze striped paper from the Regals Designer Series Paper Pack was matted with a piece of More Mustard cardstock and adhered to the card front.  A piece of Not Quite Navy 3/8" Taffeta ribbon was wrapped around the top of the card front and knotted on front.  As mentioned previously, I stamped the largest "Heartfelt" image from the Layered Labels stamp set on Vellum using Versamark ink, covered the image with Gold Stampin' Emboss powder, heat set the embossing powder with the Heat Tool, and cut out the image with Paper Snips.  The embossed image was matted with a piece of Not Quite Navy cardstock die cut with the coordinating die from the Apothecary Accents Framelits using the Big Shot and adhered to the cardfront.  The Father's Day sentiment, from the Teeny Tiny Wishes stamp set, was stamped on Very Vanilla cardstock using Not Quite Navy ink, die cut using the largest banner from the Bitty Banners Framelits and the Big Shot, and adhered over the "Heartfelt" at the center of the gold embossed image using Stampin' Dimensionals. 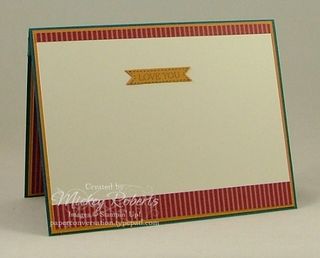 The inside sentiment area of the card was lined with a piece of Very Vanilla cardstock matted with a piece of More Mustard cardstock.  The "Love You" sentiment, from the Itty Bitty Banners stamp set, was stamped on a scrap of More Mustard cardstock using Not Quite Navy ink, die cut using the smallest banner of the Bitty Banners Framelits and the Big Shot, and adhered to the upper center of the Very Vanilla cardstock liner.  The liner seemed rather plain, so I adhered strips of the Cajun Craze striped Designer Series Paper at the bottom and top of the liner. 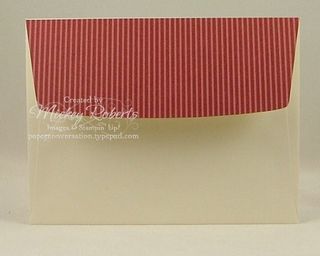 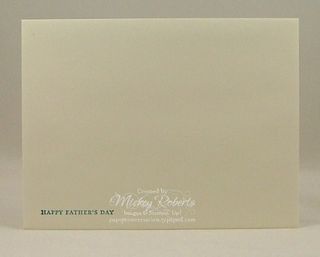 Since I had the Cajun Craze striped Designer Series Paper out, I decided to adhere some to the back flap of the Medium Very Vanilla Envelope.  The "Happy Father's Day" sentiment was stamped at the lower left front corner of the envelope.

You'll note that the design template of the Father's Day card is the same as the Christmas card I shared for the Stampin' Addicts New Catalog Blog Hop.  I love a simple design that lends itself to multiple uses.

Such great Father's Day cards! I love the one with Rosette -- very fun. The second one is spectacular as well!

Lots of love went into your DH's Father's Day card - I can see that!

Love that pocket with the ribbon on it. Pinned it so I could remember it. The other one is fabulous too.

Wow AWESOME!! I love all of them!

Love that Medallion - what a great take on something that's so trendy!!

That gift card holder is amazing!! Thank you for the directions :) And for a new-to-me color combo that I will try soon :)

Oh my how perfect are these projects!! So very creative!!